I must confess, I really like maps and I like making things (and as a result I have already begun a test board). I wouldn’t say I am totally kinesthetic in my learning, but I do find getting stuck into things very satisfying. I have divided the board into a 1 centimetre grid, and made the board about A1 size in length.  Inconveniently, the world map is not the same dimensions as standard paper! By the way, I know the map is from Nasa, but I will eventually design a world map from scratch. Well, actually, I’ll use one I have already designed for some publishing work and modify that. 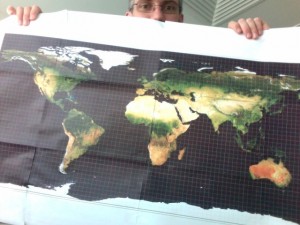 I will have to work over the board and allocate each grid with a value, as I think that this ‘city/army’ game needs resources, and as a general rule, they come from the ground (and most probably the sea). I have been thinking about the kind of land and sea resources that could be available, and trying to condense them so that the game does not get bogged down with players needing to keep track of too many things (players can add more resources if they like).

At the moment, most ideas about this are very rudimentary and generally based on board games and computer games that I have played. I currently have a list of land types in my first draft rules (which I will post once I have finished them), although I think there may be too many (ten so far). I will try to group them in order to simplify our test plays.

I already have my brother interested in a test play, so I think I might start fleshing it out with him and give the game a trial run. I must finish my basic rules first though!

My initial thoughts on the board were that it needs to be bigger, but I have had an idea that may solve this down the track. I could break the board up into world sections, which then piece together. So you could play North America, or both North and South America, or just Asia. This way you could play on a smaller board, for a faster game, with fewer players. Then, you could always enlarge the board later if desired. Another idea is to make a large number of small tiled pieces that match together as the game is played, much like Carcassonne. This would add a ‘discovery’ element, but on the other hand, it might be a bit cumbersome and could slow down game play. In any case, I thought I’d start with a smaller map of the entire world and see how I go.