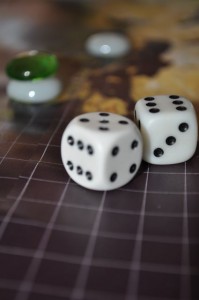 My main focus for the first test play was to nut out the rules, and try to ascertain what worked and what didn’t. Game balance was the aim of our first test play, to see if I had written fairly even rules. I had done quite a bit of research in this area, looking at the rules from a range of board and computer games to see what techniques they were adopting. Having played most of the games included in my research, I was able to identify rules that lead to dominant strategies. I tried to minimize these in Sovereign’s rules, giving the player plenty of choices, and strengthening the fun part of strategy games — decision making.

I recently tested the board game out with my brother. For the first hour we simply discussed the rules. We made a few adjustments on what I had written down and talked about my initial ideas. As mentioned earlier, I had tried to find a good balance between all the elements to avoid any dominant strategies in the game play. It would have been impossible to get this perfect the first time around, so we really had to play the game. I did try to find some balance between the two primary goals for winning; discovery and domination. There was a good balance between military units and technologies, as far as the required points/costs for each were concerned. 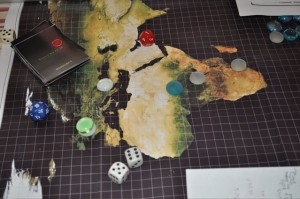 One area we were able to test was how to play the strategic part of the game. Cities in the game are where the players’ strength lies (especially at the beginning of the game), however they are also important at the end when you need to gather a lot of resources. This is a shadow cost, as building units detracts from your civilisation expansion. The unit combat usually comes into play later, so we were unable to test this area during this trial.

When we established our cities, we immediately identified the need to simplify the amount of information within each city. I had developed a chart prior to playing the game, which would help with reducing complexity. But having not played yet, I had not set these up correctly.

Terrain was time consuming to keep track of, as there are quite a few different types. You only need to calculate this once, however, for each expansion. Updating the numbers was confusing and prone to error. I created a table in the city chart that a player fills out which helps keep track of the various resources, including food, production and wealth. You fill this out according to what type of terrain exists around your city.

There are many decisions to make in this process; selecting a location, choosing what to build, improving the city or creating a unit. How you spend your wealth and what you choose to research are also vital decisions. All these add to the versatility in the game play. Our practice run focused on the best way to make these decisions. We were presented with many flaws, including what to do at each stage, and the order in which they should occur. Do we calculate the totals first? Do we then expand our city or research technology? In the end, we simplified the process and worked out that all players could calculate at the same time, then make their tactical moves at the end.

This sped up the game, and one turn went from an hour to about thirty minutes. At this stage the game is quite difficult and each turn should be completed sooner, once the players have more experience in the process. 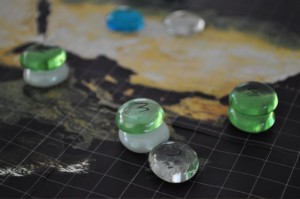 Enemy units also constantly increased in cost. I based this on the idea that your production would increase as time went on, raising the costs higher for stronger units. On top of this, I set the discovery of offense and defense units up in such a way that you could choose which to discover first. The idea here being that a player could take a defensive or offensive stance, depending on the other players in the game. In our first run of the game we did not get to do any real combat, so we could not test this effectively.

This decision was based more on personal preference, but I felt that scale-wise, the game board was too small. It made it harder to make moves on the map, as my playing pieces were larger than the grid, and resources/terrain types were harder to determine. 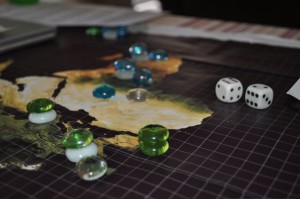 Building a few units, and moving them on the board proved interesting as it showed us some strengths and weaknesses.

I did originally have technology discovery set up like a chart, where one technology would lead to another and you might need two to get one. For example, you may need ‘road building’ and ‘pottery’ to discover ‘trade’. After discussion with my brother during the first game, we realised it was too complex. We have simplified this into sets or tiers, where you need to discover all technologies for one tier before you can start on the next. Each technology in the same tier requires the same amount of resources, which should simplify it further.

‘Bonus special resources’ was also interesting. I intended to add some random elements in the game to keep it interesting. My brother managed to acquire gold, which has a large wealth bonus and gave him a very strong advantage. Wealth can be converted into any resource. This allowed us to investigate whether the compensating factors I had applied were correct. Gold could only be converted 3 to 1 and only into one type of resource in any one turn. My brother also suggested we add market cards, which gave us a variable rate for conversion, 4:1, 3:1, 2:1 and should be drawn each turn. We will leave it for now, but it can be added into game play later.

I have worked hard to give the players a variety of choices, but I fear this has led to an overly complicated game. It keeps the game balanced, but is far more difficult for us to be able to test single parts. On reflection, however, I think it will still work. The approach I am taking is an open and flexible rule system that should allow us to simplify rules, as well as expand on the existing rules and still have a playable game.

For the next test play

The areas we examined that need improvement are:

One thought on “First trial run of the game”