Testing a board game with more players 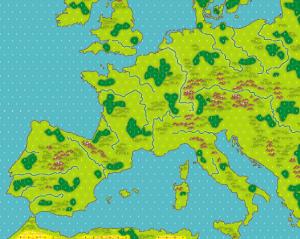 This a new design for the board using the numbers 1-7, they can also be supplemented for the terrain types as used in the original rules.

We recently had a board game day, where we played a number of board games. One of the games we played was ‘Sovereign’, and having only played it previously with two players, we managed to discover quite a few new issues with the game. This was great, and the discussion afterward left us with some interesting solutions to these problems.

The main issue, however, still remains; the overly complex economic challenges and calculating all the resources. While the balancing of many resources is challenging, it tends to create unwanted amounts of player stress, and moves game-play away from the social interaction, (especially when playing in a large group). This is one of the more appealing features of board games, and I feel it is an issue that must be addressed.

Simplifying the board game rules

When we looked at this problem, the solution was really staring us in the face. We had to find a way to reduce two things; the number of resources; and all the mathematics – the adding up for each turn was taking up too much time. I have listed a solution to this in the spin-off game ideas under combat version.  This discussed reducing the number of resources to one, resulting in less adding up, less spending and shortening turn length. In doing this we had to sacrifice some of the more interesting aspects of the current rules where players strive for a variety of resources, rather than focusing on just one. The multiple resources created a situation for the player where they must think a lot more about the rest of their game-play. When placing cities, they must consider the strategic locations, while also considering the resources in the tiles they have yet to access.  This was part of the reasoning behind the variety of resources in the first place. 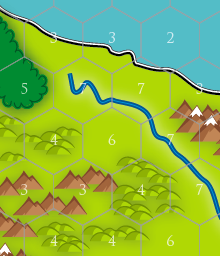 Upon review, some investigation, and a little number crunching, we found a way to maintain those aspects, albeit a little less complex. By having a single value between one and seven, players can choose between more strategic tiles and the high scoring tiles. As a general rule seven point tiles, which are located on rivers, are accessible by ships and seldom have natural mountain barriers for protection. Low scoring tiles tend to be located in or around natural defenses, or have a more strategic location.

The rules we came up with to govern city capture also help balance choices, by requiring the player to protect the first city tile or risk losing the entire city.  Rivers will generally make a long string-like city, and therefore make it harder to defend. There are also advantages in blocking another players’ access to an area by building your city in a choke point on a map. This forces a player to take a city or travel the long way around, effectively buying you time to set up defenses.

Reducing the complexity in each players’ turn 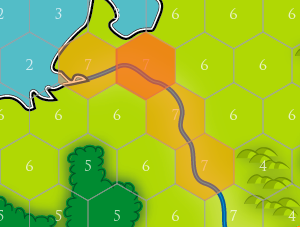 A hexagon map with the city tiles in orange. The dark orange is the central tile of the city, this needs to be defended in order to hold the entire city.

To reduce a typical turn, we decided adding points should be much simpler. Players would simply add all the points of the tiles that their cities occupy. This will give them an amount that they have to spend in a given turn. We can also remove the accumulation of points, and now players have  fewer numbers to remember.  The spin-off for this was the added challenge of trying to spend all their points in each turn. These rule changes have allowed a turn to be a lot faster, by adding up your points, spending them, and then moving your playing pieces.

I will post the new ‘light’ rules soon, once we have had a chance to test them out.

One thought on “Building a better and simpler game board”