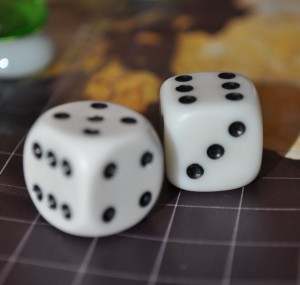 I have recently been investigating the use of different combat dice systems for ‘Sovereign’.  This is mostly because I currently have the number on the dice going up to thirteen. Rolling and adding six-sided dice is not going to be fun for the player and will slow down play dramatically.  I am also trying to avoid introducing ‘hit’ points, as this will add further complexity to the game.  After some investigation, I discovered some alternatives. Here is a list of the systems I am now aware of, and have considered.

I have run some test combat scenarios with some programing trying to give some indication of the number of wins to loses on all of these situations. In doing so I was trying to ascertain how quickly the advantage changes in favour of the upgraded units. I am trying to avoid units becoming obsolete too quickly and hence players avoiding even building certain units in the first place.

Of the combat systems I found the most appropriate for Sovereign was option 4. Reflecting on 2 and 3, they did not leave enough room for expansion of units. With 6 levels of research available we needed a certain amount of possible unit advancements and I could not get this to work well with 2 & 3. I was also trying to avoid using another system by directly taking it from an existing game. I found with option 1 that the odds changed too quickly. A player fighting with a 3 dice unit against a 1 dice unit had on average, a 95% chance of winning. This made units obsolete far too quickly.

My goal was to achieve around 20-30% increase in the chance of winning as you upgraded allowing at least 3-4 upgrades before a unit was completely obsolete. System 4 also provided the opportunity to render units completely redundant at some point as well. I think this reflects reality, helping player immersion in the game world, for example a warrior unit would not be able to beat a marine because the difference was greater than the maximum warrior roll.

As a result I have worked out that all units will roll one six-sided dice and then add their attack or defence bonus to the number. Five then becomes the obsolete point for lower units as the maximum difference is 5, a player rolling a minimum of 1 and a maximum of 6 on a dice.

Balance for novice and experienced players

There is also an extra dice for defending cities and forts, which increases with future research. This adds an element of randomness/luck and improves the chances of players who are behind defending themselves while they catch up, and reduces the chances of an experienced players always winning against a novice. A good game goal is to have experienced players win slightly more often against novice players.

6 thoughts on “Combat dice systems for board games”