We recently had another test of the board game. We attempted to play the game through, although we didn’t quite make it after seven hours of play.  We did get very close, however, so it did become obvious as to who was most likely to win.

What I was really hoping to check during the game was the balance of the unit strengths and weaknesses, and whether they were balanced against the cost, the game stage, and against other units.  The other part of our testing was the discovery tree.  There were a number of bonuses in there that had not been tested, and I felt we need to examine these as well. 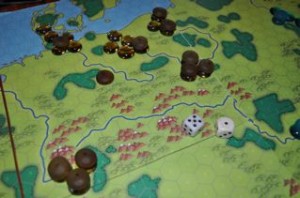 The city in the bottom left was taken more than 10 times during the game, most of the battles never needed a die.

Combat is something that is hard to measure without solid play testing.  I have created a small program where you can check the numbers of each combat system.  I have tried a number of variations, but the format we went with was 1d6 + bonus.

The results were interesting, but not exactly what I was after.  Very quickly players would opt to build large armies that did not require a roll, ensuring victory, rather than taking any chances with rolling.  This demonstrated two issues; units were not balanced using the 1d6; and there was no real balance with shadow costs, as a player was not taking any risks for the gain of winning a battle.

Balancing with alternate game strategies in your board game

There needs to be an inherent risk involved with the war strategy, and an equivalent reward.  In the game, there are of course three winning strategies, and I would like to make each valid and worthwhile.  The game balance is heavily weighed towards expansion; war being the next best strategy, and then technology.  These need to be equal, and this test-play demonstrated it’s current flaws. 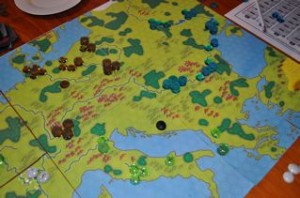 The blue player switched from technology to expansion later in the game and was unmolested due to their position on the map.

I have recoginsed some of the issues with the game. One player took the option of fighting everyone, and this stopped other players from continuing their strategy, as they needed to concentrate on their defence.  Another player took expansion as their approach, and they quickly exceeded other players in points as they researched many technologies, allowing them to catch up with players who had technology as their approach. Expansion is by far the best option, providing you are well placed on the map and not threatened by other players.

Since this test-play, I have given the issue some thought, and I am looking at finding a way to limit expansion as an option and make war and technology more appealing.

Technology also gained rewards which were too great.  Doubling of points was powerful, and allowed players to jump forward quite dramatically.  I think the technology tree can play an important part in balancing, and there are a few approaches I can take.  One is to make technology advantages dependent on other activities.  A particular form of technology could allow expansions of cities, but only cities greater than four or five.  This means the player who avoids expanding cities has a smaller reward from this technology.  This forces the player to think more carefully about their tactics long-term.

Allowing players to implement various strategies is proving to be a real hurdle, but I think it’s an important aspect to the games’ appeal.

Balancing resources on your playing board

Resources on the board were unbalanced; Spain was easily defended and had plenty of resources.

Something that needs some work is resource distribution on the board, and it can really only be worked out through test-play, although a little logic always helps.  This was evident in the first test-play and I adjusted it marginally for the next one, however, as it turns out I needed to do more.  Spain was by far the strongest position, and Greece the weakest.  I have since improved resource placement and have tried to entice players to weaker positions for more points, and stronger positions for less points.  The logic here is obvious, but the idea is to have players make a tactical choice on their location based on these two qualities and their chosen playing style.  Always give your players ‘interesting choices’.

One thought on “Testing board games for balancing”