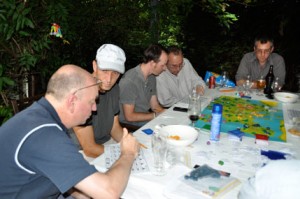 My brother and Jeff discussing tactics, that's me in the back

Well the 29th has been and gone, and the day worked out quite well. It was probably more of a thank you to everyone involved over the past year than a game launch, but it was great to watch a few first time players experience the game as well. Everyone decided to pair up and play, which created a slightly longer game, but it was fantastic to hear everyone discussing tactics. I managed to wrangle a large format print of the board! It was nice to play on a high gloss board without seams.

I did find the board a little too large, but I suspected as much from a previous game I had played with my brother (a 2 person game). I will write more in an upcoming post about this issue. 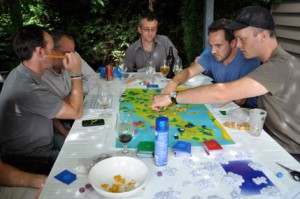 There was some really good discussion afterward, and I now have some great ideas for future versions, and tweaks to the game. I’m going to savor these ideas for later posts, so stay tuned.

I also plan to add plenty more content for downloading and customisation in the next 2 weeks.

Thank you again to everyone who could make it. I hope you enjoyed the game, and of course, don’t forget to download the game when you get a chance.