Players build around the fringes of their territory, while trying not to get too close to other players for fear of attack.

Players surprised me during a recent game. As one of them hit the lead, the other players co-operated with each other in an effort to stop that player. I must say that it was not my intention to make the rules play out this way, but instead, to create a more open game where player progress was easily identifiable. In saying that, it has effectively encouraged more player interaction. I felt this inadvertently reflected a real-world scenario, as players were put in a position where they had to compete, or they would lose the game. Some players, however, could do little because of their distance from the winning player, or their lack of resources. It played out really well and it created a spectacular and speedy end. Nothing promotes interactivity between competitors like a common enemy.

Players sacrificed their own lead to work together and hold the winning player back. Each player worked only as hard as they had to, so that they would not affect their ability to win. This created an interesting scenario as it became a race towards the end. Players were feverishly counting the number of turns it would take to win the game. At the same time, they tried to stall other players just enough to stay ahead.

The game certainly played out with the three stages I was after.  1. An easy building stage where people built up empires and strategically staked out territory. 2. A middle stage where players are more cautious, and their strategies are well thought out, (while keeping a close eye on other players). 3. The last stage; a mad rush to the finish, where players are counting every action carefully and using bonuses they’ve collected to gain advantage, and ultimately, try and win.

Let’s look at how this was achieved: 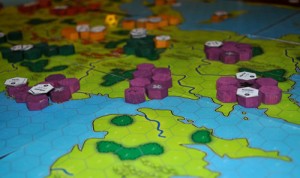 A defensive strategy. The purple player has cordoned England off for later in the game, when space becomes an issue.

Early part of the game: To make players build an empire and think strategically, there had to be limited space. A smaller board space and limited resources at the beginning meant players needed to concentrate on creating a territory.  Good players laid their cities in a way that was easy to defend, or provided land for later in the game. Players found it difficult to attack early on as the distance between players made it hard to surprise anyone. Players had plenty of time to build up defences while an enemy army approached. Players who did not spend at least some time building defences early on in the game found themselves weaker in the middle part of the game. Players had to allocate resources evenly between their own strategy, while defending themselves against other players’ strategies. How well one plays this stage could potentially affect the remainder of their game.

Midway through the game the board is starting to get crowded and players need for space is encouraging interaction. I would like to test smaller board arrangements to encourage more interaction earlier.

The mid-section of the game: Players could now see the other players strategies start to take shape, and build themselves up to counteract them. Any player trying to stop another player would be reducing their chance of winning.  This meant players had to be very calculating when making their decisions. With only a limited number of actions, it severely restricted players from getting ahead too quickly.  Balance was everything. Players could spend all actions in their turn when expanding, but then they may have found they lacked the technology and armies to defend themselves. Players also may have spent all their action points on technology, without enough city tiles to be able to buy more technology or build the newly discovered units.

The final part of the game: Players could not win by surprise, as you could only collect one victory card per turn (this rule has been changed now, but a similar condition is now in place). Players could clearly see opponent progress, so they always had time to intervene. The limited actions per turn restricted players from suddenly building numerous armies or discovering a complete row of technologies. This has greatly increased creative playing styles and caused the players to calculate very carefully.

In the end I was very happy with the pace of the game. Play at the beginning of the game is now easier, allowing players to concentrate on their own moves and ‘warm up’ their minds. The middle phase is more calculating, and tends to play a bit slower because there are many options to consider. It is also still possible to change strategies during this part of the game without affecting players chances too much. The final phase is usually over in two to four turns, and is highly stressful for the player. Hopefully this leaves them with a bit of a ‘game high’. I always find myself rapidly going over some ‘what if’ scenarios, then I try to remember them for the next game session. 🙂