Well it has been a very long time since I updated… what can you say stuff happens. I have been working on a map of the Caribbean though. Why the Caribbean? Well it was for testing ultimately. The board we have been playing has mostly been Europe, and this has proved quite a lot of fun, but that board had shown certain parts of the game to be less useful. 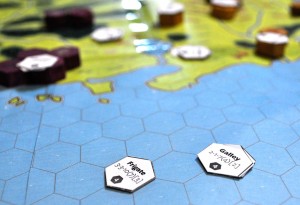 Ships head from the central islands towards the Venezuela coast

Most of the land is connected, and the shape of the land is such that the fastest way to move around the board is on land. The down side of this is that players tend to shy away from ship building. So to make sure that this part of the game works well I designed the Caribbean map. The main differences are the map is much larger,  21 land maps instead of 12. However many of these maps do not have anywhere near the amount of land on them. So effectively there is just more space filled with water. Water then becomes the most effective way to move around.

Designing a balanced board or map for strategy games

There are many things in board design that can effect play and the Europe board was changed countless times to help balance the game. I have talked about this in previous posts, but in summary, a players’ position should not determine the outcome of the game. 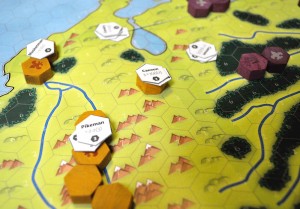 The board should be balanced in way that strong defensive locations are either low on resources or expensive to build on. While you don’t want a completely balanced board, and it would never happen unless every tile was the same, you want to make sure that the advantages of a location are equaled by the disadvantages. The main reason you don’t want a perfectly balanced board is you need the variation, this allows players to take different approaches to playing the game dependent on where they are.

Why test different boards and maps for your strategy game 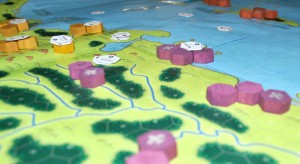 The benefit of testing these two maps is that now I can compare the play styles. The Caribbean map has somewhat spread the distance between players allowing limited contact with all players (except their direct neighbors) unless they build boats. Having a military victory is much harder as a result. The new map has helped us address some the issues related to military victories and battles. In turn we have made some major changes to attaining a military victory and I will update the rules next week. Keen players have also occupied the large number of islands in the centre of the board leaving them slightly exposed, but this has also allowed them access almost any player. 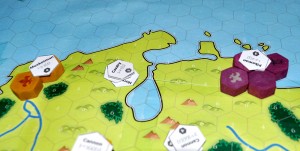 Conflict between players was limited to direct neighbours, especially while units could not travel far

They can effectively pick the weakest one from this vantage point. For these players certain technologies also hold more value than others, for example ships are much more useful than railroad. Another change is the geography, a large desert in the north west corner and jungle and rivers in the south east encourage players to build cities in the most economic fashion, rather than the most defensive.

Playing only the Europe map would never have changed play styles to such a degree. The new map also removed the players’ ability to pick key locations on the map, knowledge that had built up over several games. This really leveled the playing field again. On top of which players had a new map to play on, and the change was fun. A new world to conquer, so to speak – sorry 🙁

Building a strategy game that works on any board or map

Part of the game design is to make a game system that can work on any map, custom maps included (coming soon). So far the game system is working well for both maps. I feel they are significantly different to push the game rules, but in time more maps will tell me if that’s true.

So please enjoy the map of the Caribbean and feel free to download it for your own game.

One thought on “Testing maps and boards in strategy games”