I have provided some instructions on how to make your own version of the game. There are two sections so far. Build your own units and a custom map maker. See below for instructions and files for each.

Designing and building your own unit types

You can see here where the six unit properties can be found on the playing pieces.

The recipe for these is very simple because the values rely on each other. 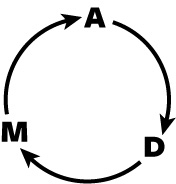 The image here shows the strengths and weaknesses of each military unit value A (attack), D (defence), M (move). Careful use of these values in custom units will maintain balance in the game.

There are number of values to consider but it is important that units should not be strong in too many values. Ideally units should be strong in only one of these three values: attack, defence or move. I have tried to make move values of strong defending units and range/high attack value units inline, so that those units share the same tier. Fast moving units of that tier should general be lower in both attack and defence than the other units of that tier.

The cost of units uses the formulas mentioned above, and they seem to work fairly well, but feel free to experiment.

The transport and range values should be limited, but transport has limited usefulness with large land masses, and range is purely a utilitarian value.

When creating pieces the dimensions of hexagons are 20mmx17mm with 10mm for each side. You can download a blank units template where you could write the values in (sorry you need a fine pen for that)

Designing your own map

I have provided a map template for players to design their own maps. There are however some limitations. One issue is that I use Illustrator to design my maps and the way I have designed the map editor requires the use of  Illustrator and the Symbols window. The benefit for those with Illustrator is it becomes a simple drag and drop affair. so it is very quick to create a map. The down side is Adobe Illustrator is a licensed product, however you could download a trial version to build your map. If you’d like to use it to make maps for your own games feel free to download, but I would appreciate the acknowledgement as per the CC license.

This is from a recent post: The board should be balanced in way that strong defensive locations are either low on resources or expensive to build on. While you don’t want a completely balanced board, and it would never happen unless every tile was the same, you want to make sure that the advantages of a location are equaled by the disadvantages. The main reason you don’t want a perfectly balanced board is you need the variation, this allows players to take different approaches to playing the game dependent on where they are.

Instructions for using illustrator to design your own map

I have tried to keep it as simple as possible for players to make their maps.