A theory of fun for game design 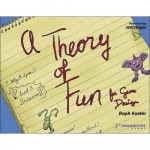 Raph Koster: Raph is Chief Creative Officer of Sony Online Entertainment, and this brilliantly illustrated book is a storyboard filled with inspirational ideas for all designers. A great book that addresses some of the issues you absolutely need to consider when designing any game. Making it fun has to be the most important factor of any game as it is nearly always the main motivator to actually play it; and play it again. There are many kinds of ‘fun’ so get reading and it will definitely get you designing with the right things in mind. Amazon

Katie Salen and Eric Zimmerman: A great book that tries to create definitions for game ideas and concepts. It looks at important theoretical ideas such as the ‘magic circle’.

As pop culture, games are as important as film or television–but game design has yet to develop a theoretical framework or critical vocabulary.  In Rules of Play Katie Salen and Eric Zimmerman present a much-needed primer for this emerging field.  They offer a unified model for looking at all kinds of games, from board games and sports to computer and video games.  As active participants in game culture, the authors have written Rules of Play as a catalyst for innovation, filled with new concepts, strategies, and methodologies for creating and understanding games.  Building an aesthetics of interactive systems, Salen and Zimmerman define core concepts like ‘play’,  ‘design’, and ‘interactivity’.  They look at games through a series of eighteen ‘game design schemas’, or conceptual frameworks, including games as systems of emergence and information, as contexts for social play, as a storytelling medium, and as sites of cultural resistance.  Written for game scholars, game developers, and interactive designers, Rules of Play is a textbook, reference book, and theoretical guide.  It is the first comprehensive attempt to establish a solid theoretical framework for the emerging discipline of game design. Description taken from: Amazon

Richard Rouse III: This book has some good discussion about game play concepts and connections it has with with some solid real-world examples.

In the second edition to the acclaimed Game Design: Theory & Practice, designer Richard Rouse III balances a discussion of the essential concepts behind game design with an explanation of how you can implement them in your current project.  Detailed analysis of successful games is interwoven with concrete examples from Rouse’s own experience.  Game Design: Theory & Practice, Second Edition thoroughly updates the popular original with new chapters and fully revised text. Description taken from: Amazon

Played at the pub: the pub games of Britain

Arthur Taylor; editor, Simon Inglis: This book is not a bad read and it gives you a little insight into a few interesting games, as well as some of the gamer mindset, especially when looking at why people play games. Those reasons haven’t changed much for a long time.

Aunt Sally in Oxfordshire, toad in the hole in East Sussex, daddlums in Kent and bagatelle in Chester – they sound like relics of a bygone age, and yet, contrary to popular belief the pub games of Britain live on, in all their infinite variety and eccentric splendour.  True, such games as knur and spell (the poor man’s golf), peggy, billets and nipsy (once played by Yorkshire miners), appear to have died out in recent years, joining in the history books such former favourites as loggats, bumble puppy, guile bones, noddy board, slide thrust, fox-mine-host and the mysterious ‘milking cromock’.  But new games emerge all the time, so that nowadays regulars are just as likely to be entering pub quizzes, playing pool or poker, or even the French game of petanque, an 1960s import which now goes down a storm in Rochdale.  Even that pub staple, the standard trebles dartboard, is a relative newcomer, having appeared on the scene only in the 1920s.  By comparison, the likes of quoits and skittles, cribbage and shove ha’penny have been with us for centuries, despite Henry VIII’s killjoy attempts to ban them all. Description taken from: Amazon